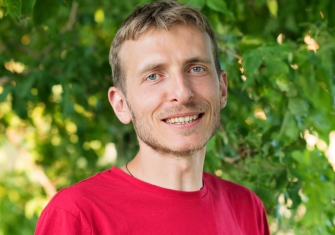 I learned about Vita Rama from a friend of mine. She has strongly recommended them since several years earlier and they had helped her to combat severe Hashimoto and without pills, chemistry and medical intervention to achieve remission and to live a complete and happy person. She described the team of Vita Rama as very bright and positive people.

I joined the program "Health" of Health Center Vita Rama in September 2014 g. I was in a very serious health and mental condition. Although I was vegetarian for four years before I met with Vita Rama, my health still seemed to go down and at one point I had the depressing feeling that I bump my head against the wall and whatever I do, it brings me only diseases. During this time I managed to get an eczema, colitis, gastritis and reflux. The latter two I added to the list as a result of several months visiting of a nutritionist, who instead of helping me with colitis, brought me gastritis and reflux.

After a stay of one week in the Health Center Vita Rama in Emona, I went away like a new person. The place is magical – on the edge between the mountain and the sea. The atmosphere, created by the team of Vita Rama is amazing - so relaxing, purifying and energizing.It is like you enterinto another world. The experience,positivism and confidence of Slavi and Lenko surchargeyou with so much energy. The food in Vita Rama is delicious and varied. I think they quite successfully debunk the universal myth that to cook a delicious meal without meat is very difficult. Although I have to admit honestly that originally in the kitchen of Vita Rama, even to me, I missed the salt and the fat we are normally used to.

After a week in Health Center Vita Rama I had quite big physical and emotional progress.

During my stay, my physical condition improved a lot. It was my first week with little stomach ache and heartburn in many months.I cannot say that in this one week I was healed like with a magic wand. I continued to experience the problems and difficulties for which I went to Vita Rama. But it was the faith and hope that I breathed through Slavi and Lenko that helped me to not give up and gradually, albeit sometimes more slowly, things began to improve steadily over time. After I returned back to my daily life, my problems came back and disappeared with a different frequency, but each time the improvement was more durable.

So, a year later, I can happily say that I managed to cope with reflux and almost forget about heartburn. My gastritis isalmost completelyhealed. Huge eczema which I had from years on my back disappeared. Also, diseases that hadsince childhood,such as asthma and allergies,have improved greatly. I continue to struggle with colitis, but I believe that with a little more patienceit will also go away.
While the purifying diet regime, prepared by Georgi and Slavi Slavov, lasted, I followed things at 100%. Then I tried to continue to live this way and I would say that it is possible and things are happening. Already nearly one year I am vegan and I eat by the high-carbohydrate regime with a low amount of fat and protein. Of course, I have my ups and downs, but my general physical condition is slowly and gradually, but steadily improving. Well ... still I have my small food temptations which I fail to resist - such as toast with tahini and honey :) but they are less.

During mystay in HealthCenter Vita Rama I managed to get out of the depression and the hole in which I had fallen and find the strength to continue with confidence and positivity forward. For the first time in a long time I felt that this time I set foot on the right path and finally stop to bump myhead against the wall. To say that I have achieved 100% faith and optimism at once will be a lie. Similar to my physical condition my emotional state too had its ups and downs after my stay in Vita Rama. Especially in moments of pain and physical problems, I happened sometimes to wonder if I'm really on the right path and whether it’s worth it. But a little more dose of perseverance and the support of Lenko and Slavi helped me to stay on the path. And consequently, I could say that a year later I'm a much more complete and happy person.

I maintain almost constant contact with the experts from Health Center Vita Rama. At the beginning we exchanged letters on a weekly basis or every one - two weeks. Then more rarely - in 1-2 months. Regardless of the frequency, however, Lenko and Slavi remain always responsive and willing to help and give guidance and advice. I think at least in the beginning, without their constant support, I would not be able to get out of the hole and to have the strength to be stable.

This year I visited Health Center Vita Rama again, but this time with all my family :)