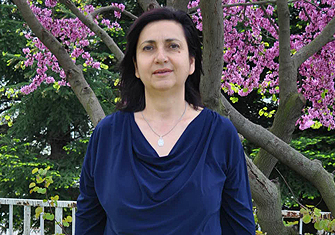 And I really needed help because I complained of being overweight, also from high blood pressure - taking drugs, includingantidepressants and in addition I suffered from palpitations. Partly I had overcomemyendocrine problem.

My stay in the center can be described in one word: great!

In Vita Rama I was involved in Weight Loss Program. This program exactly helped me to also purify my body.

I felt peaceful, relaxed andsupported by my hosts at any time.

The results were also present - the first year I lost two kilos in a week-long stay in Vita Rama. The good effect continued and the lost kilograms reached seven. Unfortunately then I gained two ...

The second year I parted with another three kilos during mystay, and I kept them and increased to five. I was more careful and thus for a year and a half  I losttotal of 10 kg!

I stopped the antidepressant also, which I was taking for more than 10 years ...

I no longer take both types of drugs for blood. I decreased a lot also the intake of that drug for myendocrine problems.

It is worth noting the delicious and very varied food in Vita Rama. Personally, I miss the salt only and after the third day it becomes hard for me, but I overcome it, because I know it's good for my health!

I continue to eat the same way for two or three months after my stay in Vita Rama, and then at certain times I remain on similar diet.

Experts from Vita Rama are an example for me with their lifestyle and diet and also with their attitude towards us patients. They are extremely caring, responsible, competent and dedicated!

I think that thanks to Vita Rama my health will still improve more. Moreover, I feel now more stable and stronger and emotionally more relaxed and mentally energetic.

Thus Vita Rama became for methe expected summer vacation. I made my reservation for the next year. I recommend to you the same without hesitation!