Roasted Pears In Pastry With Sause 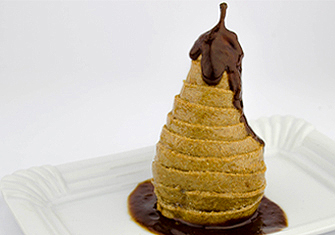 
Preparation:
Peel the pears and leave them with handles. Squeeze the juice from the oranges by taking 1-2 tablespoons of it, but the majority put in a saucepan. Add ¼ cup sugar, vanilla pod from which you have already removed the seeds and cinnamon stick. Heat the mixture, but be careful not to boil it. After warming up well at about 70-80 degrees, turn off the heat. Poach the pears leaving them to stew in the sauce with the lid on for 15-20 minutes. Then remove them. Allow the sauce to cool to room temperature and strain.

Blend well the banana and mix with ¼ cup of sugar, pinch of salt, cinnamon powder and the grains of vanilla pod. Add baking soda dissolved in a little freshly squeezed orange juice. Little by little, add the flour until a firm dough like plasticine is obtained. Leave it to rest a little. Roll on sheet with a thickness of about 1-2 mm. Cut the dough into long strips with a width of about 1 cm. Each of pears wrap entirely with strips of dough leaving the handle visible. Arrange in pan on baking paper. Bake in preheated at 170 degrees oven for about 20 minutes until the dough is browned. Glaze the roasted pears after cooling by brushing them with a little honey or maple syrup.
Peel dates and remove their pits. Blended with part of the sauce from poaching, carob flour and ¼ tsp Himalayan salt to medium dense, homogeneous sauce.
Serve pears cooled down and poured over with the sauce of dates.