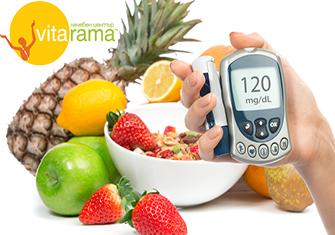 Statistics on diabetes
Diabetes is one of the most common diseases worldwide.
According to statistics of the World Health Organization (WHO), over 350 million people worldwide have diabetes, and each year further 7 million get sick. 70,000 of them are children.
By 2030, according to WHO, over 500 million people will be affected by diabetes.

According to official statistics about 500,000 people suffer from this disease in Bulgaria. However, the percentage of people not aware they suffer from diabetes is high - about 40%.

Types of diabetes
Today there are known two types of diabetes - type 1 and type 2.
Type 1 diabetes is considered an autoimmune disease, because when one has it our own immune cells attack the beta cells responsible for secretion of insulin. This is the reason to take insulin injections when it comes to type 1 diabetes.
Type 2 diabetes is associated with the metabolic imbalance that produces high blood sugar levels without the insulin production by the damaged pancreas and without existence of relative deficiency.

What is Type 2 Diabetes
As previously mentioned, type 2 diabetes is characterized by high blood sugar levels. Normal levels are considered to be below 6.1 mmol / l. Values between 6.1 and 7 mmol / l are an indication of impaired glucose tolerance, and at values above 7 mmol / l we are speaking about diabetes mellitus.

The main reason for high levels of blood sugar in the body is consuming large amounts of fats such as oil, butter, any type of animal foods, nuts and seeds. Part of these fats form superfluous fat deposits (obesity) and others stick to the walls of the cells. The end result may be insulin resistance - insulin can not bind to the insulin receptor, in order to absorb glucose.

In type 2 diabetes the pancreas synthesizes normal and sometimes excessive amounts of insulin to which the cells become resistant (due to the high fat intake). Thus glucose can not be absorbed, circulating in the blood plasma, which leads to high blood sugar levels, i.e., type 2 diabetes mellitus.

Standard treatment of type 2 diabetes
Typically it uses medicaments, coupled with low carbohydrate and a protein rich diet. Protein foods such as meat, fish, cheese, nuts and others, however, are rich in fat.

Due to the stopping of carbohydrates intake, the standard type of treatment for a certain period of time leads to an improvement in blood glucose levels and they are regulated. But in the long term the regime does not have a beneficial therapeutic effect on the body.

In this type of treatment problems with regulating blood sugar often occur and one may even end up with insulin intake. Obesity, high blood pressure, ketosis condition, renal failure, diabetic retinopathy and dementia are just a few of the conditions that associate with (such as side-effects) the standard type of treatment for type 2 diabetes.

More and more physicians and other medical centers came to the conclusion that the standard medical approach where each disease is studied separately fails to deliver positive outcomes.

In 2007, the New York Times published an article about a study showing how patients treated with a widespread medicine for type 2 diabetes - avandia, have suffered 66% more heart attacks, 39 % more strokes and deaths were 20% higher with those who suffered from cardiovascular disease.

Treatment of type 2 diabetes with a special program from Vita Rama
Our body is a complex of organs and systems working as a whole. Type 2 diabetes is the body's reaction caused by an improper diet, low physical activity, stress, environmental pollution, a variety of genetic disorders and the like. Therefore, its treatment must be consistent with these important factors that affect human health.

The special program for type 2 diabetes developed by specialists of the Vita Rama Health Center, is based on the change in the overall way of life, with emphasis on proper healing vegetable diet with a high intake of carbohydrates and low intake of fat and protein. The diet we have developed focuses mainly on carbohydrate foods - fruits, vegetables, grains and legumes. Including more carbohydrates such as rice, millet, buckwheat, corn and even potatoes, has resulted in an increase of insulin sensitivity.

In the diet of Vita Rama for type 2 diabetes treatment all kinds of more concentrated fats such as sunflower oil, olive oil, olives, nuts, seeds, avocados and others are not present. Following this regimen between 14 and 30 days resulted in a favorable outcome (blood sugar levels normalize), and ultimately cures diabetes type 2. During the regime there is a controlled stop of medications and/or insulin, and a self-regulation of high blood pressure, high triglycerides, high cholesterol is observed, the weight is reduced.

In the program for type 2 diabetes treatment developed by specialists of the Vita Rama Health Center, the physical exercises through which the blood is more rapidly cleansed from accumulated fatty particles are of paramount significance. Thus glucose begins being better absorbed resulting in the high blood sugar level adjustment.

Following the diet for proper healing plant nutrition and tips for a healthy lifestyle developed by the specialists of the Vita Rama Healht Center ensures successful treatment of type 2 diabetes, immunity against various diseases and integral health.